You're a Shining Star

Tomorrow, my album winds it’s little freaky butt to a close (I pick up the Master tomorrow at 1PM!) and I get to sit back and listen once again to my songs. I get to listen closely and intently to the people who have come and played their hearts out on their instruments for me. I get to have that private smile one gets when they have an inside joke, or hold a secret they can’t tell yet, from the shared giggles of the entire experience of being lucky enough to get to go through this process with people I admire and respect. There are many people on the list of creative creatures I would like to collaborate with, and this album holds one chapter of the mission.

One shining creature who sang on this album was my darling friend and hermana, Sonia.

And today as the sun went down in a windy Ballina, in the Northern Rivers of New South Wales, Australia, I hugged her and waved her and sent her off to a new chapter of her own.

And, Georgia: you don’t know how lucky you are. Seriously.

Miss Sonia has one of those singing voices that you just wish you could have. Most days the radio leaves me befuddled and confused when there’s people like Sonia walking around with a voice like hers. Just wandering around! Tone, style, heart, musicality, the harmonies she hears in her head to sing, and the words she makes up when jamming her little heart out: ‘Tingles in your soul’, doesn’t cut it. Words don’t describe. I’m not even going to try. It’s pointless.

Let me tell you about Sonia.

Sonia is most usually, but not always, but generally – and kinda mainly, late. And it can be frustrating if you’re on the receiving end, waiting impatiently, tapping your fingers and checking your stupid emails again, as if some demi-god maybe wrote to you in the last 3 minutes since you checked it. In fact, I usually use my waiting for Sonia time to ring and catch up with old or distant friends. It’s a common window of opportunity. But then she turns up, possibly with a stray dog or a lost new friend hovering around and, Lord Above, does the sun shine upon your world. But when you’re with her, and she’s late for something else, you start to get an idea of what’s happening. She will have spent the entire time with you: asking, enquiring and caring: about you. And maybe, if you’re lucky, right at the end, if you ask, and ask again, she will share what’s on in her world. It’s unheard of – the entire open hearted love she rushes upon caring about you. It’s one of a kind. I’ve never witnessed anything like it. And it makes me wonder how much of a self talker I am to other people. Sonia teaches me about balance. In so many ways.

And this is not just me. Sonia has gypsied around touching so very many souls. There’s heaps of us. She appears to be mainly oblivious to the fb world, because she’s living in the real world. She is teaching and singing, and caring and sending her laughter to pretty much every single soul she comes in contact with.

Which I guess is why it brings me so much joy to my somewhat tainted and bitter heart, when she recalls her early morning shift as a barista, making coffee for the caffeine-heads who find themselves awake at 6am; and tells me of the one lady who insistently banged her hand on the bench, demanding her coffee – and Sonia sent her away: “You’re Rude. I’m not serving you. Go away!”. Because Sonia cares for her coffee drinkers! She actually – really – does. I hope cranky lady had a moment and straightened herself out. A Byron Bay awakening or some such.

When Sonia and I go out and buy coffee together, she asks the waitress her name, and remembers them, she asks how they are, and chats. Because she cares. Because time is not a worry. She has all the time in the world. To just actually really care.

This is where one of my secret habits sneaks out. I watch faces. I like to see a person smiling or laughing with another, and then watch, as they walk away, how long that smile stays there once they’re off crusading in the world by them selves. Does the smile disappear? as soon as they turn around and walk? or do they jaunt and jiggle and waddle off, smiling all the way and passing it on? Most people that find a smile on their face from Sonia keep it there till their out of my sight. *Favourite habit.

(A similar habit is to see a persons face for only a split second, when you whizz by in traffic or what not, caught in bizarre, tongue-cleaning-the-gums or mid sneeze kind of a facial expressions. It’s another thing that reminds me to walk around smiling a little more.)

I have met more strangers and made many friends from knowing Sonia.

I have learnt to stress less and smile more.

And sing stronger, and trust my songwriting.

And laugh harder, till I snort, or cry, or both.

This is all getting a little Hallmarky.

So just raise a glass, where ever you are, grab something nearby and toast the dear friends you have in your life, near or far.

Travel safe Soni, sing strong, and just keep being you. 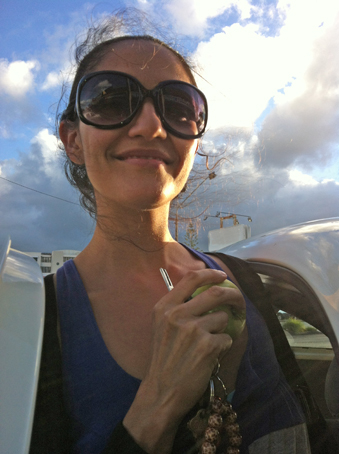