It was begun long ago, but, as far as the Owl, this project has begun.

A dear new and wonderful friend of mine, Melissa Main, was double booked in two Melbourne venues last week, and I was delighted to be able to take one of the gigs off her hands while I was on a quick trip to Melbourne to see family, friends, new babies and Erykah Badu!

So, the humble abode of Bar 303, set in the ever changing High Street of Northcote (Melbourne, Australia) was our host to invite a delicious bunch of friends and family to come down and see and hear our new songs from our soon to be released album ‘Where the Owl Was’, performed for the first time with a smokin’ band, with sparkling new charts, big shoes and smiling faces.

Melbourne is always a whirlwind for me-
filled with memories.
Of packing three kids and a mum and a dad
into a white ford falcon,

and driving for two days from the north coast sun, to all the way down Sydney road, Melby Town.

Take a left at Pentridge and wind around all the way to Studley Park Road.

This trip was the first in years,

where I found myself in a hire car at the junction,

down we go, the first time since a heatwave one new years eve not so long ago…

friends partying up on the roof,

and I found myself a half built house and cried myself to peace.

Even driving down to the Palais,

they went to see YES, and Led Zeppelin, or was it Little River Band and Nash… 😉 or Mick Jagger as a young man.

Driving past where my grandfather passed.

down on one of the straight roads of line de tram.

On to 303 and we played our songs with an amazing band. Mr Ryan Berg on drums, Mr Patrick Kilby on Bass, Mr Dan Brown on Keys and Miss Joanna Lavell singing her sultry harmonies.

I’m always astounded by how women can wear those big heeled shoes.

But I gave it my all.

My all is good. 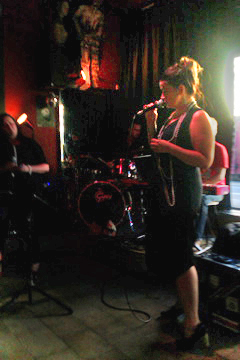 *Just as a strange and beautiful aside:

My birthday, incidentally, is on the 25th of February. Though I didn’t turn up for another 14 years, something about all that is really cool.*